Search our library using the search box below or visit the library catalog at TinyCat.

Stop by the labor center to browse the library or checkout materials. Email Alex Bacon at alex.bacon@seattlecolleges.edu or call 206-934-6671 to borrow by inter-campus mail within the Seattle Colleges, to make alternate arrangements for pickup, or to have the materials mailed to you (within Washington State only). 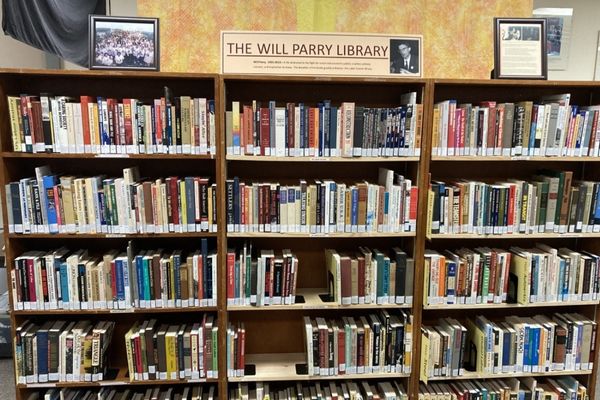 Our library collection is organized by subject. You can search our catalog using the search box at the top of this page or view our collection by category below.

Spans a variety of topics related to labor in the Pacific Northwest region, with emphasis on Washington State and the Greater Seattle area.  See the collection here.

Includes history of organized labor, as well as more general history of working people in the United States. Our collection focuses on 19th and 20th century working class movements. See the collection here.

Includes histories and stories about a variety of unions in the U.S., including the ILWU and the Teamsters. Sub-categories in this section were chosen based on the greater number of works we have about that specific union or industry.

See the other union histories here.

Histories or reports about labor issues and unions outside of the U.S., spanning many different movements and time periods. See the collection here.

A collection of grassroots organizing handbooks for labor activists and rank-and-file members, including community outreach and strategy. See the collection here.

Case studies and reports on workplace safety, workers' health rights, and labor movements that have shifted standards and procedures in relation to industrial hygiene. See the collection here.

Oral histories and research on immigrant rights in the U.S., immigration policy, and immigrant workers across a variety of industries. See the collection here.

Explores the relationship between race, ethnicity, and class amongst the U.S. labor force, with a special focus on African Americans, Latino/as, Native Americans, Asian Americans, and the multiracial working class. See the collection here.

Includes personal narratives, research, and history about women and labor, the rise of women leadership in unions, and LGBTQ issues and involvement and labor. See the collection here.

Includes research and theory about the rise of the working class through the perspectives of Sociology, Philosophy, Political Science, Psychology, Cultural Studies, and Political Science. Our collection houses many early works on Marxism, Leninism, and the science of revolution. See the collection here.

Research and reports on the U.S. labor market, industry and workplace management, and the global labor economy. See the collection here.

Includes the history of U.S. government structures and their impact on labor, current political viewpoints, and political parties and their role in labor policy. See our collection here.

Includes art of the labor movement and working people, cartoon art on labor themes, labor movements in the arts and entertainment industry, and political art. See the collection here.

Includes novels and essays relating to labor movements and working class people. Some authors in our collection include Upton Sinclair, John Steinbeck, and Toni Morrison. See our collection here.

Born in 1920, Will Parry came of age during the Great Depression. He became active in the Communist Party in Washington State as it strove to organize the poor and unemployed, and he played a vital role in the labor movement’s resurgence. After serving in the Coast Guard during World War 2, Parry stuck to his principles when he stood up to the House Committee on Un-American Activities in 1954, invoking his constitutional rights when questioned about his work and his political affiliations, losing his job as a result.

He struggled to find work, and was eventually hired by Longview Fibre in Seattle. There, he became a union leader, and was elected by his coworkers to be the lobbyist for their union, the Association of Western Pulp and Paper Workers. Later in life, he was among the first instructors to bring labor studies to higher education in Washington by teaching at Shoreline Community College. In Will’s retirement, he formed the Puget Sound Advocates for Retirement Action (PSARA) and fought to protect and strengthen Social Security, Medicaid, and Medicare for all generations.

Will Parry donated his books to the Labor Center when it relocated to South Seattle College’s Georgetown Campus in 2010. His generous donation of 430 volumes almost doubled the size of our library at that time. His collection of books includes some of the greatest studies in labor and working-class history. Each book he donated contains a bookplate with an AP news photo of Will at a 1954 House Committee on Un-American Activities hearing. The pin he’s wearing says “Joe must go”—a statement against Senator Joseph McCarthy.

We at the Labor Center are grateful for Will’s donation to our library, and for his lifetime of leadership in the struggle for social justice. Will passed away on May 13, 2013, at the age of 93.